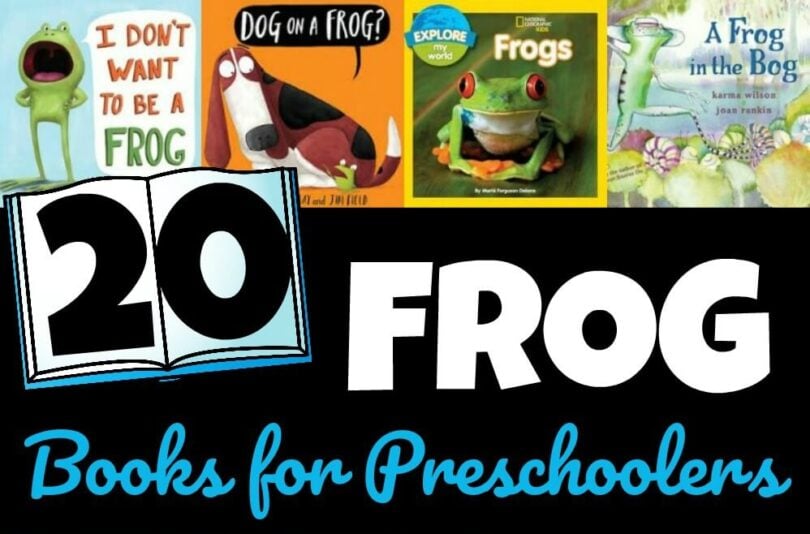 For some reason, kids of all ages love frogs! Help pick some amazing books for your frog lover with these 20 great frog books for preschoolers.

Frogs are fun creatures to learn about. From their jumping legs to their sticky tongues, they make great characters for children’s books. This list of children’s books about frogs has a little something for everyone. Whether you are looking for board books, nonfiction books or fun stories, you will find something great on this list!

was written by Priscilla Burns. This illustrated form of the catchy children’s song will have little ones singing and counting along and laughing at the adorable frogs in the illustrations.

was written by Ginger Swift and illustrated by Olga Demidova. In this adorable board book, kids can lift the flaps and follow the little green frog as he introduces them to different pond dwelling animals.

was written by Rodrigo Folgueira and illustrated by Poly Bernatene. In this silly book, a group of frogs is surprised when they discover a little pink pig sitting on a rock in their pond and saying “Ribbit” just like them. Kids will love watching the adorable pig and croaking along with him.

was written by Lauren Thompson and illustrated by Derek Anderson. Join Mama Duck’s five little frogs as they are introduced to a new frog friend. The illustrations use vibrant colors and adorable animals to teach kids about friendship.

That’s Not My Frog…

was written by Fiona Watt. This addition to the “That’s Not My…” series uses different touch and feel sensations on each page. Each page shows a different frog with a different texture on it, and the repeating text introduces descriptive vocabulary.

I Don’t Want to Be a Frog

was written by Dev Petty and illustrated by Mike Boldt. In this silly story, a young frog decides that he wants to be something other than a frog. He argues with his father about all the parts of being a frog that he doesn’t like, but eventually learns that being himself isn’t so bad.

was written and illustrated by Mercer and Marianna Mayer. This wordless picture book follows a young boy who receives a frog as a gift, even though he already has one. The engaging illustrations will inspire kids to create their own story and dialogue.

There Was an Old Lady Who Swallowed a Frog!

was written by Lucille Colandro and illustrated by Jared Lee. In this repeating story, the old lady swallows a list of silly things, eventually creating something beautiful for the first day of spring.

was written by Jonathan London and illustrated by Frank Remkiewicz. While frogs are supposed to be good swimmers, Froggy is afraid of the water. The sweet story addresses the message of facing your fears, and kids will love the adorable characters and the repeated shouting of Froggy’s name. Check out this list of bravery books for more stories on facing your fears!

Frog and Toad are Friends

was written and illustrated by Arnold Lobel. These classic short stories follow Frog and Toad as they share adventures and learn lessons together. The message of friendship is shared in easy to read text and sweet illustrations of the cute pair.

was written and illustrated by Leo Lionni. Three selfish frogs spend their days arguing over food, and learn an important lesson about sharing. The collage style illustrations are done in Lionni’s signature style.

Dog on a Frog?

was written by Claire and Kes Gray and illustrated by Jim Field. When a frog decides that he doesn’t want to sit on a log anymore, it sets off a chain reaction of all kinds of animals sitting in ridiculous places. This silly story is full of funny wordplay and hilarious illustrations that will have kids laughing along.

was written by Kwame Alexander and illustrated by Daniel Miyares. Bro and Dude are two frogs who are heading to the beach for the day. But Bro is having fun reading his book and isn’t ready to put it down and start surfing yet. The illustrations put them into the book he’s reading, and eventually Dude is so interested that he has to know how the story ends, even though they made it to the beach.

was written by Nora Shalaway Carpenter and illustrated by Mark Chambers. Join Frog as he practices yoga moves and encourages kids to get their bodies moving too. The text shares helpful tips to perform the various poses, and the adorable illustrations show Frog performing them. Click here for more yoga books for kids!

A Frog in the Bog

was written by Karma Wilson and illustrated by Joan Rankin. This lyrical story uses a repeating rhyming text to create a fun counting story that kids will love singing and calling out loud.

was written by Elizabeth Carney. This informative book uses an easy to read text and brightly colored photographs to teach the reader all about frogs. For more nonfiction books about nature, check out this list!

was written by Wendy Pfeffer and illustrated by Holly Keller. This book follows the life cycle of frogs from tadpole to grown frog. The watercolor illustrations are full of pond animals and plants, showing kids where tadpoles and frogs live and grow.

was written by Gail Gibbons. This fact filled book shares lots of information about frogs in a manner that kids can easily understand. The illustrations are detailed and colorful, keeping kids engaged as they learn about frogs and their abilities.

was written by Diane Burns. This educational guide is full of information about different species of frogs, toads and turtles. Each page features facts and illustrations about a different species. The book also includes ideas for frog, toad and turtle activities for kids to do.