Whether you are planning an animal theme or just looking to pick out some amazing books for kids …. you will love these Animal Books for Preschoolers. 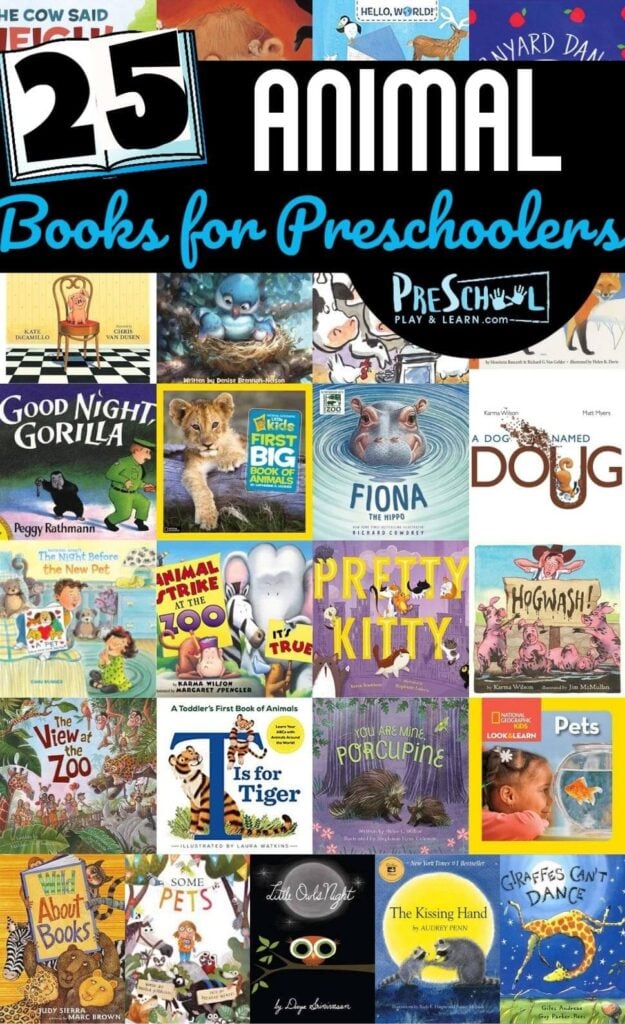 Kids and animals go together like peanut butter and jelly. So there are tons of amazing children’s books about animals that teach and entertain little ones through characters they adore. This list of animal stories for Kids includes stories about farm animals, zoo animals, woodland animals, and more!

was written by Doreen Cronin and illustrated by Betsy Lewin. Farmer Brown’s cows like to type. This becomes a hilarious problem for Farmer Brown when he starts receiving notes from the animals, asking for things.

was written and illustrated by Sandra Boynton. This lively rhyming story follows a group of animals as they stomp, twirl, and dance the night away together. The peppy text and silly characters will have kids jumping up to dance along.

was written by Rory Feek and illustrated by Bruno Robert. In this colorful story, animals all over the farm find themselves wishing they could be like other animals. The hilarious story is full of vibrantly colored illustrations of farm animals acting goofy.

was written by Karma Wilson and illustrated by Jim McMullan. Follow an unlucky farmer as he attempts to bathe the pigs on his farm, only to discover that they have no intention of getting clean.

was written by Karma Wilson and illustrated by Matt Myers. Doug is a dog who loves to dig, but one day, his digging gets out of control. The silly story uses fun fonts and illustrations to make the words part of the imagery. Check out this post with fun activities to pair with this book!

The Night Before the New Pet

was written by Natasha Wing and illustrated by Amy Wummer. This spin on the classic Christmas poem follows a family as they make preparations for welcoming a new pet into their home.

was written by Angela DiTerlizzi and illustrated by Brendan Wenzel. This rhyming book celebrates the wide variety of animals that make great pets. The simple text is paired with boisterous illustrations full of silly animal friends.

was written by Kate DiCamillo and illustrated by Chris Van Dusen. This picture book is a prequel to the Mercy Watson series of books, and it tells the reader the story of how the little piglet came to live with the Watsons.

was written by Karen Beaumont and illustrated by Stephanie Laberis. When a stray cat shows up on a lonely old man’s doorstep, he tells it to go away. But soon, more cats have joined the first one. This counting book includes a sweet message about the place that pets hold in our hearts.

was written by Karma Wilson and illustrated by Jane Chapman. While Bear snoozes in his den, a storm rages outside. Other animals come into his den to hide from the storm, but what happens when their fun wakes him up?

was written by Audrey Penn and illustrated by Ruth Harper. Chester Raccoon is starting school, and he is too scared to go. Luckily his mother knows a secret that will help him to feel her love even when they are separated.

was written and illustrated by Divya Srinivasan. When Little Owl wakes up at night, he watches all of his woodland friends and wonders how the daytime could be any better than the night.

You Are Mine, Porcupine

was written by Helen L. Wilbur and illustrated by Stephanie Fizer Coleman. This sweet story follows a mother porcupine and her baby, as she reminds him of all the characteristics that make him unique.

was written by Denise Brennan-Nelson and illustrated by Marco Bucci. This sweet rhyming story takes the reader through a day in the woods, introducing the reader to the various plants and animals, and watching them drift to sleep at night. Check out these other bedtime books for kids!

was written by Peggy Rathmann. As the zookeeper says good night to the various animals, a sneaky gorilla steals his keys, and causes trouble by unlocking cages.

was written by Giles Andreae and illustrated by Guy Parker-Rees. Gerald the giraffe just wants to dance, but his long legs and neck make it hard for him to move the way he wants to. But he soon learns to be himself and dance to his own beat.

was written by Zondervan and illustrated by Richard Cowdrey. Join the animals at the Cincinnati Zoo as they welcome the arrival of Fiona the baby hippo, and watch her beat the odds and overcome the obstacles that came from her early arrival.

was written by Judy Sierra and illustrated by Marc Brown. When librarian Molly McGrew accidentally drives her bookmobile to the zoo, she introduces the animals to the wide world of books and reading. This rhyming book is a celebration of books and reading, and the power that they hold. Check out these fun books that also celebrate the power of reading!

The View at the Zoo

was written by Karma Wilson and illustrated by Margaret Spengler. The animals at the zoo have decided to go on strike. But when a young girl named Sue enters the gates for her long awaited visit, can she stop the strike?

was written by Henrietta Bancroft and Richard G. Van Gelder and illustrated by Helen K. Davie. This informative book uses a simple storytelling format and soft illustrations to tell the reader how different animals handle the harsh conditions of winter.

was written by Jill McDonald. This brightly colored book uses large, simple text and adorable cartoon illustrations to introduce young readers to the various animals who live in the Arctic.

by National Geographic Kids uses simple text and large, clear photographs to teach little ones about the many animals that make great pets.

by National Geographic is a brightly colored guide to various animals. The text is informative, and the layout provides lots of fun facts and tidbits about the animals featured in the bright photographs.

T Is for Tiger: A Toddler’s First Book of Animals

was written by Laura Watkins. This alphabet book pairs different animals with each letter of the alphabet, and provides interesting facts about some of the animals featured in the illustrations. 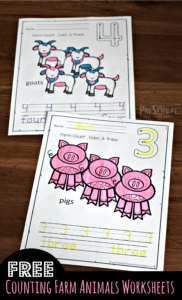 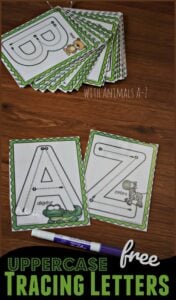 Looking for more animal printables and games for kids? You will love these ideas: